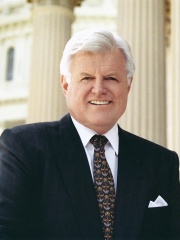 Edward Moore Kennedy (February 22, 1932 – August 25, 2009) was an American politician and lawyer who served as a U.S. Senator from Massachusetts for almost 47 years, from 1962 until his death in 2009. A member of the Democratic Party and the Kennedy political family, he was the second most senior member of the Senate when he died and is the fourth-longest-continuously-serving senator in United States history. Kennedy was a brother of President John F. Kennedy and U.S. Attorney General and U.S. Senator Robert F. Kennedy and was the father of Congressman Patrick J. Read more on Wikipedia

Since 2007, the English Wikipedia page of Ted Kennedy has received more than 9,569,524 page views. His biography is available in 59 different languages on Wikipedia making him the 1,485th most popular politician.

Among politicians, Ted Kennedy ranks 1,476 out of 14,801. Before him are Heinz Fischer, Louis II of Italy, Lü Buwei, Edward, King of Portugal, Philoctetes, and Isaac I Komnenos. After him are Muhammad II of Khwarazm, Marcus Furius Camillus, Fredrik Bajer, Alcide De Gasperi, Jeconiah, and Theuderic I.