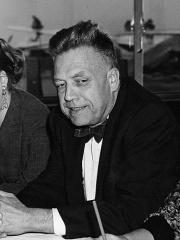 Alfred Charles Kinsey (; June 23, 1894 – August 25, 1956) was an American biologist, professor of entomology and zoology, and sexologist who, in 1947, founded the Institute for Sex Research at Indiana University, now known as the Kinsey Institute for Research in Sex, Gender, and Reproduction. He is best known for writing Sexual Behavior in the Human Male (1948) and Sexual Behavior in the Human Female (1953), also known as the Kinsey Reports, as well as the Kinsey scale. Kinsey's research on human sexuality, foundational to the field of sexology, provoked controversy in the 1940s and 1950s. Read more on Wikipedia

Alfred Kinsey is most famous for his research on human sexuality. He was a biologist and professor of entomology and zoology at Indiana University. Kinsey's research focused on human sexuality, specifically the frequency of sexual behavior among both males and females, including homosexual activity, and sexual responses, among others.