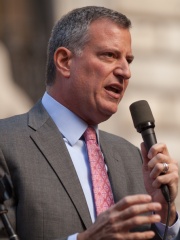 Bill de Blasio (; born Warren Wilhelm Jr., May 8, 1961; later Warren de Blasio-Wilhelm) is an American politician who served as the 109th mayor of New York City from 2014 to 2021. A member of the Democratic Party, he held the office of New York City Public Advocate from 2010 to 2013. De Blasio was born in Manhattan and raised primarily in Cambridge, Massachusetts. Read more on Wikipedia

Bill de blasio is most famous for being the mayor of New York City. He was elected in 2013 and served until 2017.

Among politicians, Bill de Blasio ranks 2,193 out of 15,577. Before him are Prince Carl, Duke of Västergötland, Charles Martel of Anjou, Peter, King of Hungary, Robert, King of Naples, Ignacy Jan Paderewski, and Alfonso III of Asturias. After him are Haakon the Good, Antanas Smetona, Tianqi Emperor, Mara Branković, Risto Ryti, and Fuad Masum.