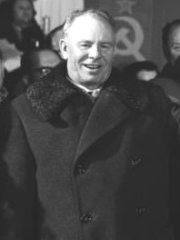 Nikolai Viktorovich Podgorny (Ukrainian: Микола Вікторович Підгорний, Russian: Никола́й Ви́кторович Подго́рный, IPA: [nʲɪkɐˈlaj ˈvʲiktərəvʲɪtɕ pɐdˈgornɨj]; 18 February [O.S. 5 February] 1903 – 12 January 1983) was a Soviet statesman who served as the Chairman of the Presidium of the Supreme Soviet, the head of state of the Soviet Union, from 1965 to 1977. Podgorny was born to a Ukrainian working-class family in the city of Karlovka in 18 February 1903. He later graduated from a local worker's school in 1926 before completing his education at the Kyiv Technological Institute of Food Industry in 1931. Read more on Wikipedia

Nikolai Podgorny was the Chairman of the Presidium of the Supreme Soviet from 1964 to 1977. He was also the First Secretary of the Central Committee of the Communist Party of Ukraine from 1960 to 1977.

Among politicians, Nikolai Podgorny ranks 1,958 out of 15,710. Before him are Beji Caid Essebsi, Michael Bloomberg, Charles Albert of Sardinia, Yuri Dolgorukiy, Chlothar III, and Jeongjong, 3rd monarch of Goryeo. After him are Prince Edward, Duke of Kent and Strathearn, William II of Sicily, Raisa Gorbacheva, Hostilian, Sigismund of Burgundy, and Beyhan Sultan.