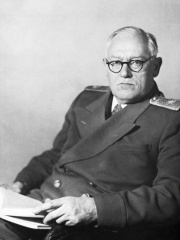 Andréy Yanuár'yevich Vyshínskiy (Russian: Андре́й Януа́рьевич Выши́нский; Polish: Andrzej Wyszyński) (10 December [O.S. 28 November] 1883 – 22 November 1954) was a Soviet politician, jurist and diplomat. He is known as a state prosecutor of Joseph Stalin's Moscow Trials and in the Nuremberg trials. He was the Soviet Foreign Minister from 1949 to 1953, after having served as Deputy Foreign Minister under Vyacheslav Molotov since 1940. Read more on Wikipedia

Andrey Vyshinsky was a Soviet politician and lawyer who was the chief prosecutor of the Soviet Union. He is most famous for his role in the show trials of the 1930s, including those of Leon Trotsky and Nikolai Bukharin.

Among politicians, Andrey Vyshinsky ranks 1,512 out of 15,710. Before him are Romanos III Argyros, Manuel Azaña, Al-Mahdi, Princess Stéphanie of Belgium, Bleda, and Conradin. After him are Chenghua Emperor, Emmanuel Macron, Léon Blum, John II of Castile, Mohamed Morsi, and Dorgon.