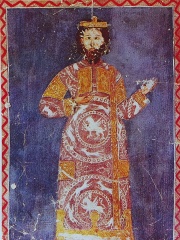 Alexios V Doukas (Greek: Ἀλέξιος Δούκας; c. 1140 – December 1204), in Latinised spelling Alexius V Ducas, was Byzantine emperor from February to April 1204, just prior to the sack of Constantinople by the participants of the Fourth Crusade. His family name was Doukas, but he was also known by the nickname Mourtzouphlos or Murtzuphlus (Μούρτζουφλος), referring to either bushy, overhanging eyebrows or a sullen, gloomy character. He achieved power through a palace coup, killing his predecessors in the process. Read more on Wikipedia

Alexios I Doukas was most famous for his role in the Battle of Manzikert, where he led a Byzantine army to victory against the Seljuk Turks.

Among politicians, Alexios V Doukas ranks 1,850 out of 15,577. Before him are Ioannis Kapodistrias, Henry II of Castile, Habibullāh Kalakāni, Francis, Duke of Anjou, Ludvík Svoboda, and Baasha of Israel. After him are Luís I of Portugal, Boris Johnson, Kenan Evren, Andrey Vyshinsky, Edward, King of Portugal, and Nikolai Podgorny.

Among people born in 1140, Alexios V Doukas ranks 3. Before him are Raymond III, Count of Tripoli and Peter Waldo. After him are Adela of Champagne, Hoelun, Bertran de Born, Sophia of Minsk, Bernhard, Count of Anhalt, Peire Vidal, William of Montferrat, Count of Jaffa and Ascalon, Richeza of Poland, Queen of Castile, and Michael Choniates. Among people deceased in 1204, Alexios V Doukas ranks 5. Before him are Maimonides, Eleanor of Aquitaine, Isaac II Angelos, and Alexios IV Angelos. After him are Emeric, King of Hungary, Nicholas Kanabos, Haakon III of Norway, Ban Kulin, Nur ad-Din al-Bitruji, Minamoto no Yoriie, and Berthold, Duke of Merania.