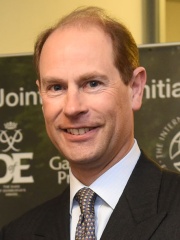 Prince Edward, Earl of Wessex (Edward Antony Richard Louis; born 10 March 1964) is the youngest child of Queen Elizabeth II and Prince Philip, Duke of Edinburgh. At birth, he was third in line of succession to the British throne; as of November 2020, he is 11th in line. Born at Buckingham Palace, Edward studied at Heatherdown School before earning his A-levels at Gordonstoun where he was made guardian. Read more on Wikipedia

Since 2007, the English Wikipedia page of Prince Edward, Earl of Wessex has received more than 14,950,002 page views. His biography is available in 47 different languages on Wikipedia making him the 159th most popular nobleman.

Page views of Prince Edward, Earl of Wessexes by language

Among noblemen, Prince Edward, Earl of Wessex ranks 176 out of 559. Before him are Anna Maria Luisa de' Medici, Daniel of Moscow, Eleonora Gonzaga, Frederick, Prince of Wales, Grand Duke Paul Alexandrovich of Russia, and Jobst of Moravia. After him are Albrecht III Achilles, Elector of Brandenburg, Sigurd Snake-in-the-Eye, Grand Duke Konstantin Nikolayevich of Russia, Princess Marie of Hohenzollern-Sigmaringen, Guntram the Rich, and Ercole I d'Este, Duke of Ferrara.