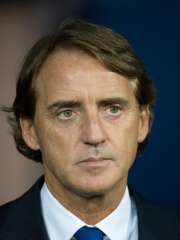 Roberto Mancini (Italian pronunciation: [roˈbɛrto manˈtʃiːni]; born 27 November 1964) is an Italian football manager and former player who is the manager of the Italy national team. As a player, Mancini operated as a deep-lying forward, and was best known for his time at Sampdoria, where he played more than 550 matches, and helped the team win the Serie A league title, four Coppa Italia titles, and the European Cup Winners' Cup. He was capped 36 times for Italy, taking part at UEFA Euro 1988 and the 1990 FIFA World Cup, achieving semi-final finishes in both tournaments, although he was never put onto the pitch during the 1990 tournament. Read more on Wikipedia