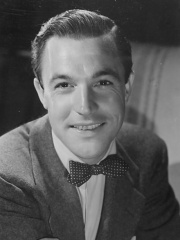 Eugene Curran Kelly (August 23, 1912 – February 2, 1996) was an American actor, dancer, stage, and television, singer, film director, producer, screenwriter, comedian and choreographer. He was known for his energetic and athletic dancing style, his good looks, and the likable characters that he played on screen. Best known today for his performances in films such as On the Town (1949) also for his directorial debut, An American in Paris (1951), Anchors Aweigh (1945)— for which he was nominated for the Academy Award for Best Actor—and Singin' in the Rain (1952), he starred in musical films until they fell out of fashion in the late 1950s. Read more on Wikipedia

Since 2007, the English Wikipedia page of Gene Kelly has received more than 5,720,146 page views. His biography is available in 67 different languages on Wikipedia making him the 285th most popular actor.