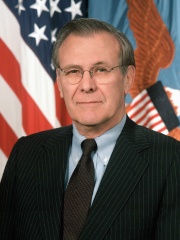 Donald Henry Rumsfeld (born July 9, 1932) is a retired American politician. Rumsfeld served as Secretary of Defense from 1975 to 1977 under Gerald Ford, and again from January 2001 to December 2006 under George W. Bush. He is both the youngest and the second-oldest person to have served as Secretary of Defense. Additionally, Rumsfeld was a three-term U.S. Read more on Wikipedia

Since 2007, the English Wikipedia page of Donald Rumsfeld has received more than 4,072,494 page views. His biography is available in 49 different languages on Wikipedia making him the 1,723rd most popular politician.

Among politicians, Donald Rumsfeld ranks 1,713 out of 14,801. Before him are Karl Renner, Hotepsekhemwy, Marozia, Baldwin V of Jerusalem, David IV of Georgia, and Constantine X Doukas. After him are Yulia Tymoshenko, Peter II of Aragon, Clodius Albinus, Simeon Saxe-Coburg-Gotha, Princess Isabella of Parma, and Diadumenian.