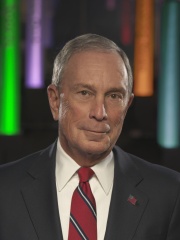 Michael Rubens Bloomberg (born February 14, 1942) is an American businessman, politician, philanthropist, and author. He is the majority owner and co-founder of Bloomberg L.P. He was the mayor of New York City from 2002 to 2013, and was a candidate for the 2020 Democratic nomination for president of the United States. Bloomberg grew up in Medford, Massachusetts, and graduated from Johns Hopkins University and Harvard Business School. Read more on Wikipedia

Michael Bloomberg is most famous for being the mayor of New York City from 2002 to 2013. He is also the founder and CEO of Bloomberg L.P., a global financial software, data, and media company.

Among politicians, Michael Bloomberg ranks 1,953 out of 15,710. Before him are Karl Hermann Frank, Maximinus II, Ernest, Duke of Austria, Louise of Lorraine, Šuppiluliuma I, and Beji Caid Essebsi. After him are Charles Albert of Sardinia, Yuri Dolgorukiy, Chlothar III, Jeongjong, 3rd monarch of Goryeo, Nikolai Podgorny, and Prince Edward, Duke of Kent and Strathearn.