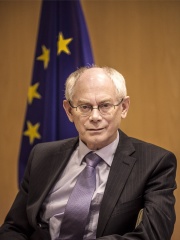 Herman Achille, Count Van Rompuy (Dutch pronunciation: [ˈɦɛrmɑɱ vɑn ˈrɔmpœy]; born 31 October 1947) is a Belgian politician, who served as Prime Minister of Belgium from 2008 to 2009 and then as the first permanent President of the European Council from 2009 to 2014. A politician from Belgium's Christian Democratic and Flemish party, Van Rompuy served as the 49th prime minister of Belgium from 30 December 2008 until Yves Leterme (who was also his predecessor) succeeded him on 25 November 2009. On 19 November 2009 Van Rompuy was selected by the members of the European Council, which is the institution of the European Union (EU) comprising the heads of state or government of the EU member states, as the first full-time President of that Council under the Treaty of Lisbon. Read more on Wikipedia

Herman Van Rompuy is a Belgian politician who served as the first President of the European Council.

Among politicians, Herman Van Rompuy ranks 1,763 out of 15,710. Before him are Oruç Reis, Pyotr Stolypin, Ernest I, Duke of Saxe-Coburg and Gotha, Ma Chao, Joannes, and Marozia. After him are Louis II, Prince of Monaco, Cemal Gürsel, Dangun, Emmanuel Philibert, Duke of Savoy, Pupienus, and Faisal II of Iraq.