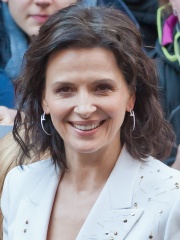 Juliette Binoche (French pronunciation: ​[ʒyljɛt binɔʃ]; born 9 March 1964) is a French actress, artist, and dancer. She has appeared in more than sixty feature films and has been the recipient of numerous accolades, including an Academy Award, a British Academy Film Award, and a César Award. Binoche began taking acting lessons during adolescence and, after performing in several stage productions, was cast in the films of such notable auteur directors as Jean-Luc Godard (Hail Mary, 1985), Jacques Doillon (Family Life, 1985), and André Téchiné; the latter would make her a star in France with the leading role in his drama Rendez-vous (1985). Read more on Wikipedia

Juliette Binoche is a French actress who is most famous for her roles in films such as "The Unbearable Lightness of Being" and "The English Patient."