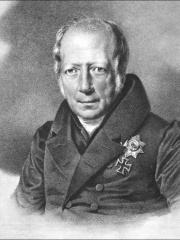 Friedrich Wilhelm Christian Karl Ferdinand von Humboldt (, also US: , UK: ; German: [ˈvɪlhɛlm fɔn ˈhʊmbɔlt]; 22 June 1767 – 8 April 1835) was a Prussian philosopher, linguist, government functionary, diplomat, and founder of the Humboldt University of Berlin, which was named after him in 1949 (and also after his younger brother, Alexander von Humboldt, a naturalist). He is especially remembered as a linguist who made important contributions to the philosophy of language, ethnolinguistics and to the theory and practice of education. He made a major contribution to the development of liberalism by envisioning education as a means of realizing individual possibility rather than a way of drilling traditional ideas into youth to suit them for an already established occupation or social role. Read more on Wikipedia

Wilhelm von Humboldt is most famous for his work in linguistics, philosophy, and education. He was a professor of philology at the University of Berlin and one of the first proponents of the idea that language is an organic part of culture.

Among philosophers, Wilhelm von Humboldt ranks 104 out of 1,081. Before him are Zhuang Zhou, Pierre-Joseph Proudhon, Isidore of Seville, Roland Barthes, Ibn Taymiyyah, and Theophrastus. After him are Henri de Saint-Simon, Jacques Derrida, Aristippus, Joseph Priestley, Friedrich Fröbel, and Philo.