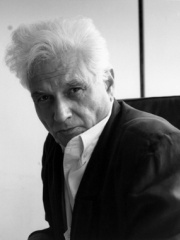 Jacques Derrida (; French: [ʒak dɛʁida]; born Jackie Élie Derrida; 15 July 1930 – 9 October 2004) was an Algerian-born French philosopher best known for developing a form of semiotic analysis known as deconstruction, which he analyzed in numerous texts, and developed in the context of phenomenology. He is one of the major figures associated with post-structuralism and postmodern philosophy.During his career, Derrida published more than 40 books, together with hundreds of essays and public presentations. Read more on Wikipedia

Jacques Derrida is most famous for his deconstruction of the Western philosophical tradition.

Among philosophers, Jacques Derrida ranks 92 out of 1,089. Before him are Jean Bodin, Tertullian, Johann Gottfried Herder, Pierre-Joseph Proudhon, Friedrich Fröbel, and John of Damascus. After him are Gorgias, Isidore of Seville, Athanasius of Alexandria, Al-Kindi, Zhuang Zhou, and Gregory of Nazianzus.

Among PHILOSOPHERS In Algeria