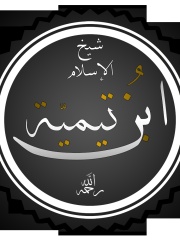 Ibn Taymiyyah (January 22, 1263 – September 26, 1328; Arabic: ابن تيمية), birth name Taqī ad-Dīn ʾAḥmad ibn ʿAbd al-Ḥalīm ibn ʿAbd al-Salām al-Numayrī al-Ḥarrānī (Arabic: تقي الدين أحمد بن عبد الحليم بن عبد السلام النميري الحراني), was a Sunni ʿĀlim, muhaddith, judge, philosopher, proto-Salafist theologian, and sometimes controversial thinker and political figure. He is known for his diplomatic involvement with the Ilkhanid ruler Ghazan Khan and for his involvement at the Battle of Marj al-Saffar which ended the Mongol invasions of the Levant. A member of the Hanbali school, Ibn Taymiyyah's iconoclastic views that condemned numerous folk practices associated with saint veneration and the visitation of tomb-shrines; made him unpopular with many scholars and rulers of the time, and he was imprisoned several times.A polarising figure in his own times and in the centuries that followed, Ibn Taymiyyah has emerged as one of the most influential medieval writers in contemporary Sunni Islam. Read more on Wikipedia

Ibn Taymiyyah is most famous for his belief that Muslims should not live under non-Muslim rule. He also believed that the Muslim world should be united under one caliphate.

Among philosophers, Ibn Taymiyyah ranks 102 out of 1,081. Before him are Walter Benjamin, Mencius, Zhuang Zhou, Pierre-Joseph Proudhon, Isidore of Seville, and Roland Barthes. After him are Theophrastus, Wilhelm von Humboldt, Henri de Saint-Simon, Jacques Derrida, Aristippus, and Joseph Priestley.

Among people born in 1263, Ibn Taymiyyah ranks 1. After him are Isabella of Villehardouin, Yolande of Dreux, Queen of Scotland, and David VIII of Georgia. Among people deceased in 1328, Ibn Taymiyyah ranks 1. After him are Charles IV of France, Meister Eckhart, Clementia of Hungary, Isabella of Castile, Queen of Aragon, John of Montecorvino, Charles, Duke of Calabria, Yesün Temür, Galeazzo I Visconti, Ragibagh Khan, Prince Hisaaki, and Castruccio Castracani.