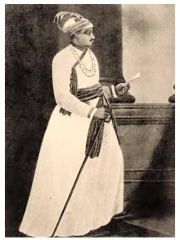 Mirza Muhammad Siraj-ud-Daulah (Persian: مرزا محمد سراج الدولہ‎, Bengali: মির্জা মুহাম্মাদ সিরাজউদ্দৌলা; 1733 – 2 July 1757), commonly known as Siraj-ud-Daulah or Siraj ud-Daula, was the last independent Nawab of Bengal. The end of his reign marked the start of British East India Company rule over Bengal and later almost all of the Indian subcontinent. Siraj succeeded his maternal grandfather, Alivardi Khan as the Nawab of Bengal in April 1756 at the age of 23. Read more on Wikipedia

Among politicians, Siraj ud-Daulah ranks 6,463 out of 15,710. Before him are Hayato Ikeda, Svein Knutsson, Perictione, Henutmire, William I, Count of Holland, and Muhammad Baqir al-Sadr. After him are Marie of Saxe-Altenburg, Margaret of Burgundy, Queen of Sicily, Rashid bin Saeed Al Maktoum, Jay Rockefeller, Toshiki Kaifu, and Alberic I of Spoleto.