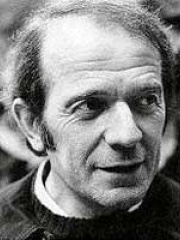 Gilles Deleuze (; French: [ʒil dəløz]; 18 January 1925 – 4 November 1995) was a French philosopher who, from the early 1950s until his death in 1995, wrote on philosophy, literature, film, and fine art. His most popular works were the two volumes of Capitalism and Schizophrenia: Anti-Oedipus (1972) and A Thousand Plateaus (1980), both co-written with psychoanalyst Félix Guattari. His metaphysical treatise Difference and Repetition (1968) is considered by many scholars to be his magnum opus. Read more on Wikipedia

Among philosophers, Gilles Deleuze ranks 104 out of 1,089. Before him are Gregory of Nazianzus, Roland Barthes, Philo, Theophrastus, Wilhelm von Humboldt, and Meister Eckhart. After him are Ibn Taymiyyah, Nagarjuna, Bonaventure, Tommaso Campanella, Eusebius, and Pyrrho.