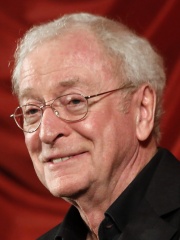 Sir Michael Caine (born Maurice Joseph Micklewhite Jr.; 14 March 1933) is an English actor. Known for his distinctive South London accent, he has appeared in more than 130 films in a career spanning six decades, and is considered a British film icon. As of February 2017, the films in which Caine has appeared have grossed over $7.8 billion worldwide.Caine made his breakthrough in the 1960s with starring roles in British films such as Zulu (1964), The Ipcress File (1965), Alfie (1966), The Italian Job (1969), and Battle of Britain (1969). Read more on Wikipedia

Michael Caine is a British actor who is best known for his roles in films such as The Dark Knight, Alfie, Educating Rita, and The Ipcress File.