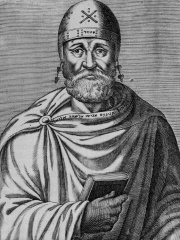 Philo of Alexandria (; Ancient Greek: Φίλων, romanized: Phílōn; Hebrew: יְדִידְיָה הַכֹּהֵן‎‎, romanized: Yedidia (Jedediah) HaCohen; c.  20 BCE – c.  50 CE), also called Philo Judaeus, was a Hellenistic Jewish philosopher who lived in Alexandria, in the Roman province of Egypt. Philo's deployment of allegory to harmonize Jewish scripture, mainly the Torah, with Greek philosophy was the first documented of its kind, and thereby often misunderstood. Many critics of Philo assumed his allegorical perspective would lend credibility to the notion of legend over historicity. Philo often advocated a literal understanding of the Torah and the historicity of such described events, while at other times favoring allegorical readings.Though never properly attributed, Philo's marriage of Jewish exegesis and Stoic philosophy provided a formula later picked up by other Midrash content from the 3rd and 4th centuries C.E. Read more on Wikipedia

Philo was a Jewish philosopher who lived in Alexandria, Egypt during the 1st century CE. He is most famous for his allegorical interpretations of the Hebrew Bible.

Page views of Philos by language

Among philosophers, Philo ranks 100 out of 1,089. Before him are Isidore of Seville, Athanasius of Alexandria, Al-Kindi, Zhuang Zhou, Gregory of Nazianzus, and Roland Barthes. After him are Theophrastus, Wilhelm von Humboldt, Meister Eckhart, Gilles Deleuze, Ibn Taymiyyah, and Nagarjuna.

Others Born in 15 BC