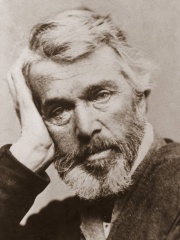 Thomas Carlyle (4 December 1795 – 5 February 1881) was a Scottish historian, satirical writer, essayist, translator, philosopher, mathematician, and teacher. In his book On Heroes, Hero-Worship, and The Heroic in History (1841), he argued that the actions of the "Great Man" play a key role in history, claiming that "the history of the world is but the biography of great men". Other major works include The French Revolution: A History, 3 vols (1837) and The History of Friedrich II of Prussia, Called Frederick the Great, 6 vols (1858–65).His 1837 history of the French Revolution was the inspiration for Charles Dickens's 1859 novel A Tale of Two Cities, and remains popular today. Read more on Wikipedia

Thomas Carlyle is most famous for his book "The French Revolution" which he wrote in 1837.

Among philosophers, Thomas Carlyle ranks 232 out of 1,089. Before him are Slavoj Žižek, Franz Brentano, Chilon of Sparta, Celsus, Epimenides, and William Godwin. After him are Baltasar Gracián, Michael Psellos, Ivan Illich, Cratylus, Ernst Bloch, and Judah Loew ben Bezalel.