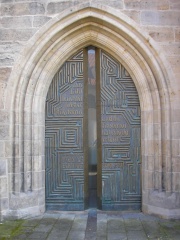 Eckhart von Hochheim (c. 1260 – c. 1328), commonly known as Meister Eckhart or Eckehart, was a German theologian, philosopher and mystic, born near Gotha in the Landgraviate of Thuringia (now central Germany) in the Holy Roman Empire.Eckhart came into prominence during the Avignon Papacy at a time of increased tensions between monastic orders, diocesan clergy, the Franciscan Order, and Eckhart's Dominican Order of Preachers. In later life, he was accused of heresy and brought up before the local Franciscan-led Inquisition, and tried as a heretic by Pope John XXII. He seems to have died before his verdict was received.He was well known for his work with pious lay groups such as the Friends of God and was succeeded by his more circumspect disciples John Tauler and Henry Suso. Since the 19th century, he has received renewed attention. Read more on Wikipedia

Since 2007, the English Wikipedia page of Meister Eckhart has received more than 858,640 page views. His biography is available in 50 different languages on Wikipedia making him the 103rd most popular philosopher.

Among philosophers, Meister Eckhart ranks 101 out of 1,005. Before him are Roland Barthes, Zhuang Zhou, Jacques Derrida, Athanasius of Alexandria, Ibn Arabi, and Tommaso Campanella. After him are Theophrastus, Al-Kindi, Gilles Deleuze, Wilhelm von Humboldt, Zhu Xi, and Philo.

Among people born in 1260, Meister Eckhart ranks 1. After him are Guillaume de Nogaret, Władysław I the Elbow-high, Antipope Nicholas V, Al-Ashraf Khalil, Matthew III Csák, Al-Said Barakah, Agnes of France, Duchess of Burgundy, Lloque Yupanqui, Maximus Planudes, Anna of Hungary, and Bartolomeo Gradenigo. Among people deceased in 1328, Meister Eckhart ranks 2. Before him is Charles IV of France. After him are Ibn Taymiyyah, Clementia of Hungary, Ragibagh Khan, Yesün Temür, Isabella of Castile, Queen of Aragon, John of Montecorvino, Galeazzo I Visconti, and Prince Hisaaki.