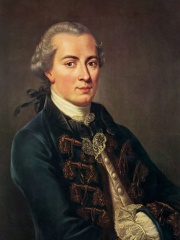 Immanuel Kant (UK: , US: , German: [ɪˈmaːnu̯eːl ˈkant]; 22 April 1724 – 12 February 1804) was a German philosopher and one of the central Enlightenment thinkers. Born in Königsberg, Kant's comprehensive and systematic works in epistemology, metaphysics, ethics, and aesthetics have made him one of the most influential figures in modern Western philosophy.In his doctrine of transcendental idealism, Kant argued that space and time are mere "forms of intuition" which structure all experience, and therefore, while "things-in-themselves" exist and contribute to experience, they are nonetheless distinct from the objects of experience. From this it follows that the objects of experience are mere "appearances" and that the nature of things as they are in themselves is unknowable to us. Read more on Wikipedia

Immanuel Kant is most famous for his work in the philosophy of ethics, metaphysics, and aesthetics. He was a German philosopher who lived from 1724-1804.

Among philosophers, Immanuel Kant ranks 8 out of 1,081. Before him are Plato, Socrates, Confucius, Pythagoras, René Descartes, and Gautama Buddha. After him are Jean-Jacques Rousseau, Avicenna, John Locke, Niccolò Machiavelli, Friedrich Nietzsche, and Francis Bacon.