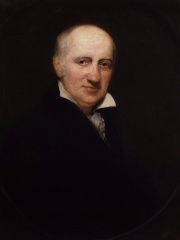 William Godwin (3 March 1756 – 7 April 1836) was an English journalist, political philosopher and novelist. He is considered one of the first exponents of utilitarianism and the first modern proponent of anarchism. Godwin is most famous for two books that he published within the space of a year: An Enquiry Concerning Political Justice, an attack on political institutions, and Things as They Are; or, The Adventures of Caleb Williams, an early mystery novel which attacks aristocratic privilege. Read more on Wikipedia

Among philosophers, William Godwin ranks 273 out of 1,081. Before him are Hans Jonas, Xenocrates, Andronicus of Rhodes, Julius Evola, Pherecydes of Syros, and Paramahansa Yogananda. After him are Georges Sorel, Alain Badiou, Raymond Aron, Alexander of Aphrodisias, G. E. Moore, and Houston Stewart Chamberlain.