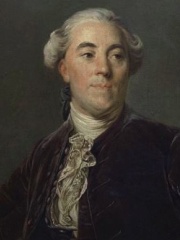 Jacques Necker (IPA: [ʒak nɛkɛʁ]; 30 September 1732 – 9 April 1804) was a Genevan banker and statesman who served as finance minister for Louis XVI. He was a reformer, but his innovations sometimes caused great discontent. Necker was a constitutional monarchist, a political economist, and a moralist, who wrote a severe critique of the new principle of equality before the law.Necker held the finance post between July 1777 and 1781, being "remembered today for taking the unprecedented step in 1781 of making public the country's budget, a novelty in an absolute monarchy where the state of finances had always been kept a secret." Necker was dismissed within a few months. By 1788, the inexorable compounding of interest on the national debt brought France to a fiscal crisis. Read more on Wikipedia

Jacques Necker was a french banker and statesman. He was most famous for being the finance minister of France during the French Revolution.

Among politicians, Jacques Necker ranks 1,310 out of 15,577. Before him are Amenemhat III, Reuven Rivlin, Briseis, Maria Anna of Savoy, Itō Hirobumi, and Gregor Strasser. After him are Vladimir II Monomakh, Francis I of the Two Sicilies, Neoptolemus, Imad ad-Din Zengi, Norodom Sihamoni, and William McKinley.