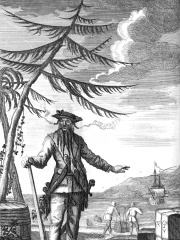 Edward Teach (alternatively spelled Edward Thatch, c. 1680 – 22 November 1718), better known as Blackbeard, was an English pirate who operated around the West Indies and the eastern coast of Britain's North American colonies. Little is known about his early life, but he may have been a sailor on privateer ships during Queen Anne's War before he settled on the Bahamian island of New Providence, a base for Captain Benjamin Hornigold, whose crew Teach joined around 1716. Hornigold placed him in command of a sloop that he had captured, and the two engaged in numerous acts of piracy. Read more on Wikipedia

Since 2007, the English Wikipedia page of Blackbeard has received more than 11,123,426 page views. His biography is available in 55 different languages on Wikipedia (up from 54 in 2019). Blackbeard is the 2nd most popular pirate, the 124th most popular biography from United Kingdom (down from 106th in 2019) and the most popular British Pirate.

Blackbeard was a notorious pirate who terrorized the Atlantic coast of North America and the Caribbean during the early 18th century. He captured more than 40 ships and became one of the wealthiest pirates in history.

Page views of Blackbeards by language

Among pirates, Blackbeard ranks 2 out of 25. Before him are Hayreddin Barbarossa. After him are Henry Morgan, Eric of Pomerania, Alexander Selkirk, Anne Bonny, Bartholomew Roberts, Calico Jack, Mary Read, D. B. Cooper, William Kidd, and François l'Olonnais.