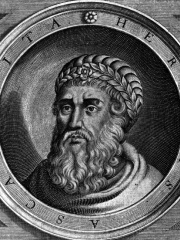 Herod I (; Hebrew: הוֹרְדוֹס‎, Modern: Hōrdōs, Tiberian: Hōrəḏōs; Greek: Ἡρῴδης Hērṓidēs; c. 72 – 4 or 1 BCE), also known as Herod the Great, was a Roman Jewish client king of Judea, referred to as the Herodian kingdom. He is known for his colossal building projects throughout Judea, including his renovation of the Second Temple in Jerusalem and the expansion of the Temple Mount towards its north, the enclosure around the Cave of the Patriarchs in Hebron, the construction of the port at Caesarea Maritima, the fortress at Masada, and Herodium. Read more on Wikipedia

Hereditary king of Judea, and the Roman client-king of the province of Judea. He was the son of Antipater the Idumaean, and Cypros, a Nabatean Arab.

Page views of Herod the Greats by language

Among politicians, Herod the Great ranks 107 out of 15,577. Before him are Frederick I, Holy Roman Emperor, Pontius Pilate, Mehmed III, Philip IV of France, Hadrian, and Mary II of England. After him are Hermann Göring, Isabella I of Castile, Yasser Arafat, Pepin the Short, Louis XIII of France, and Philip II of Macedon.

Others Born in 73 BC

Others Deceased in 3 BC