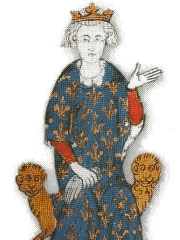 Philip IV (April–June 1268 – 29 November 1314), called Philip the Fair (French: Philippe le Bel), was King of France from 1285 to 1314. By virtue of his marriage with Joan I of Navarre, he was also King of Navarre as Philip I from 1284 to 1305, as well as Count of Champagne. Although Philip was known to be handsome, hence the epithet le Bel, his rigid, autocratic, imposing, and inflexible personality gained him (from friend and foe alike) other nicknames, such as the Iron King (French: le Roi de fer). Read more on Wikipedia

Philip IV of France is most famous for his role in the Albigensian Crusade, which was a crusade against the Cathars of southern France.

Page views of Philip IV of Frances by language

Among politicians, Philip IV of France ranks 104 out of 15,577. Before him are Mary, Queen of Scots, Theodosius I, Kim Il-sung, Frederick I, Holy Roman Emperor, Pontius Pilate, and Mehmed III. After him are Hadrian, Mary II of England, Herod the Great, Hermann Göring, Isabella I of Castile, and Yasser Arafat.