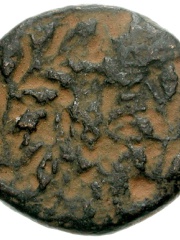 Herod Antipas (Greek: Ἡρῴδης Ἀντίπας, Hērǭdēs Antipas; born before 20 BC – died after 39 AD), was a 1st-century ruler of Galilee and Perea, who bore the title of tetrarch ("ruler of a quarter") and is referred to as both "Herod the Tetrarch" and "King Herod" in the New Testament, although he never held the title of king. He is widely known today for accounts in the New Testament of his role in events that led to the executions of John the Baptist and Jesus of Nazareth. (Matthew 14:1–12) After being recognized by Augustus upon the death of his father, Herod the Great (4 BC), and subsequently by his brother, the ethnarch Herod Archelaus, Antipas officially ruled Galilee and Perea as a client state of the Roman Empire. Read more on Wikipedia

Herod Antipas was most famous for his role in the trial and execution of John the Baptist.

Among politicians, Herod Antipas ranks 283 out of 15,710. Before him are Julian, Golda Meir, Khafra, Edward II of England, Lee Kuan Yew, and Bill Clinton. After him are Jacques Chirac, Charles VIII of France, Eva Perón, Xi Jinping, Alexander II of Russia, and Victor Emmanuel II of Italy.

Others Born in 20 BC