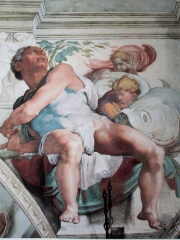 Jonah or Jonas, son of Amittai, is a prophet in the Hebrew Bible and the Quran, from Gath-hepher of the northern kingdom of Israel in about the 8th century BCE. Jonah is the central figure of the Book of Jonah, which details his reluctance in delivering God's judgement on the city of Nineveh, and then his subsequent, albeit begrudged, return to the divine mission after he is swallowed by a large sea creature. In Judaism, the story of Jonah represents the teaching of teshuva, which is the ability to repent and be forgiven by God. In the New Testament, Jesus calls himself "greater than Jonah" and promises the Pharisees "the sign of Jonah", which is his resurrection. Read more on Wikipedia

Since 2007, the English Wikipedia page of Jonah has received more than 3,169,894 page views. His biography is available in 58 different languages on Wikipedia (up from 57 in 2019). Jonah is the 30th most popular religious figure (down from 29th in 2019), the 12th most popular biography from Israel and the 11th most popular Israeli Religious Figure.

Jonah is most famous for being swallowed by a giant fish.

Page views of Jonahs by language

Among religious figures, Jonah ranks 30 out of 2,238. Before him are Ali, Abu Bakr, Matthew the Apostle, Saint Barbara, Samson, and Martin of Tours. After him are Saint Stephen, John the Apostle, Pope Benedict XVI, Saint Lucy, Husayn ibn Ali, and Queen of Sheba.

Others Deceased in 810 BC