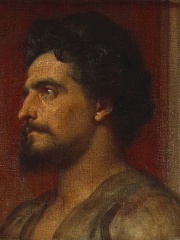 Samson (; Hebrew: שִׁמְשׁוֹן, Šīmšōn, "man of the sun") was the last of the judges of the ancient Israelites mentioned in the Book of Judges (chapters 13 to 16) and one of the last leaders who "judged" Israel before the institution of the monarchy. He is sometimes considered as an Israelite version of the popular Near Eastern folk hero also embodied by the Sumerian Enkidu and the Greek Heracles.The biblical account states that Samson was a Nazirite, and that he was given immense strength to aid him against his enemies and allow him to perform superhuman feats, including slaying a lion with his bare hands and massacring an entire army of Philistines using only the jawbone of a donkey. However, if Samson's long hair were cut, then his Nazirite vow would be violated and he would lose his strength.Samson is betrayed by his lover Delilah, who, sent by the Philistines officials to entice him, orders a servant to cut his hair while he is sleeping and turns him over to his Philistine enemies, who gouge out his eyes and force him to grind grain in a mill at Gaza. Read more on Wikipedia

Samson is most famous for being a biblical figure who was given superhuman strength by God. He was captured by the Philistines and forced to work for them, but he eventually killed them with the jawbone of a donkey.

Page views of Samsons by language

Among religious figures, Samson ranks 28 out of 2,238. Before him are Elijah, John Calvin, Ali, Abu Bakr, Matthew the Apostle, and Saint Barbara. After him are Martin of Tours, Jonah, Saint Stephen, John the Apostle, Pope Benedict XVI, and Saint Lucy.