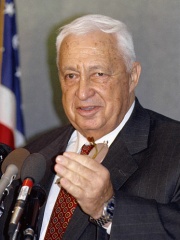 Ariel Sharon (Hebrew: אֲרִיאֵל שָׁרוֹן; IPA: [aʁiˈ(ʔ)el ʃaˈʁon] (listen); Ariʼēl Sharōn; also known by his diminutive Arik, אָרִיק‎, born Ariel Scheinermann, אֲרִיאֵל שַׁיינֶרְמָן‎; 26 February 1928 – 11 January 2014) was an Israeli general and politician who served as the 11th Prime Minister of Israel from March 2001 until April 2006.Sharon was a commander in the Israeli Army from its creation in 1948. As a soldier and then an officer, he participated prominently in the 1948 Palestine war, becoming a platoon commander in the Alexandroni Brigade and taking part in many battles, including Operation Bin Nun Alef. He was an instrumental figure in the creation of Unit 101 and the reprisal operations, as well as in the 1956 Suez Crisis, the Six-Day War of 1967, the War of Attrition, and the Yom-Kippur War of 1973. Read more on Wikipedia

Ariel Sharon was the Prime Minister of Israel from 2001 to 2006. He is most famous for his military career, where he was a tank commander during the Six-Day War in 1967 and the Yom Kippur War in 1973.