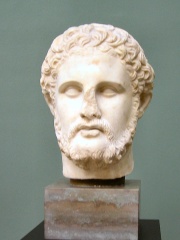 Philip II of Macedon (Greek: Φίλιππος Philippos; 382 – 21 October 336 BC) was the king (basileus) of the ancient kingdom of Macedonia from 359 BC until his death in 336 BC. He was a member of the Argead dynasty, founders of the ancient kingdom, and the father of Alexander the Great. The rise of Macedon—its conquest and political consolidation of most of Classical Greece during his reign—was achieved by his reformation of the army (the establishment of the Macedonian phalanx that proved critical in securing victories on the battlefield), his extensive use of siege engines, and his utilization of effective diplomacy and marriage alliances. After defeating the Greek city-states of Athens and Thebes at the Battle of Chaeronea in 338 BC, Philip II led the effort to establish a federation of Greek states known as the League of Corinth, with him as the elected hegemon and commander-in-chief of Greece for a planned invasion of the Achaemenid Empire of Persia. Read more on Wikipedia

Philip II of Macedon is most famous for his military conquests, which included the conquest of Greece and the Persian Empire. He was also the father of Alexander the Great.

Page views of Philip II of Macedons by language

Among politicians, Philip II of Macedon ranks 113 out of 15,577. Before him are Herod the Great, Hermann Göring, Isabella I of Castile, Yasser Arafat, Pepin the Short, and Louis XIII of France. After him are Hatshepsut, Tiberius, Clovis I, Diocletian, Cyrus the Great, and Mustafa I.

Others Deceased in 336 BC