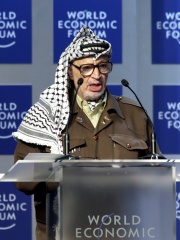 Mohammed Abdel Rahman Abdel Raouf al-Qudwa al-Husseini (4 / 24 August 1929 – 11 November 2004), popularly known as Yasser Arafat ( ARR-ə-fat, also US: AR-ə-FAHT; Arabic: محمد ياسر عبد الرحمن عبد الرؤوف عرفات القدوة الحسيني, romanized: Muḥammad Yāsir ʿAbd al-Raḥmān ʻAbd al-Raʼūf ʿArafāt al-Qudwa al-Ḥusaynī‎; Arabic: ياسر عرفات, romanized: Yāsir ʿArafāt) or by his kunya Abu Ammar (Arabic: أبو عمار, romanized: ʾAbū ʿAmmār), was a Palestinian political leader. He was Chairman of the Palestine Liberation Organization (PLO) from 1969 to 2004 and President of the Palestinian National Authority (PNA) from 1994 to 2004. Ideologically an Arab nationalist and a socialist, he was a founding member of the Fatah political party, which he led from 1959 until 2004. Arafat was born to Palestinian parents in Cairo, Egypt, where he spent most of his youth and studied at the University of King Fuad I. Read more on Wikipedia

Among politicians, Yasser Arafat ranks 110 out of 15,577. Before him are Philip IV of France, Hadrian, Mary II of England, Herod the Great, Hermann Göring, and Isabella I of Castile. After him are Pepin the Short, Louis XIII of France, Philip II of Macedon, Hatshepsut, Tiberius, and Clovis I.