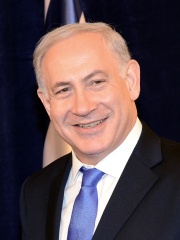 Benjamin "Bibi" Netanyahu (; Hebrew: בִּנְיָמִין נְתַנְיָהוּ Bīnyāmīn Nētanyāhū ; born 21 October 1949) is an Israeli politician who has been serving as the prime minister of Israel since December 2022, having previously held the office from 1996 to 1999 and again from 2009 to 2021. He is the chairman of the Likud party. Netanyahu is the longest-tenured prime minister in the country's history, having served for a total of over 15 years. Read more on Wikipedia

Netanyahu is most famous for being the Prime Minister of Israel.

Among politicians, Benjamin Netanyahu ranks 655 out of 15,577. Before him are Edmund Burke, Michael I of Romania, Suharto, Kliment Voroshilov, Tiberius Gracchus, and Daniel Ortega. After him are Edward the Elder, Archduchess Gisela of Austria, Charles IV of Spain, Leo III the Isaurian, Georgi Dimitrov, and Andromache.