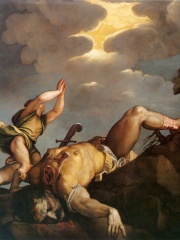 Goliath ( gə-LY-əth) is a character in the biblical Book of Samuel, described as a Philistine giant defeated by the young David in single combat. The story signified Saul's unfitness to rule, as Saul himself should have fought for Israel. Read more on Wikipedia

Goliath is most famous for being the giant who was killed by David with a slingshot.

Page views of Goliaths by language

Among politicians, Goliath ranks 348 out of 15,710. Before him are Baldwin IV of Jerusalem, Alaric I, Mahidevran, Louis II of Hungary, George V, and Barack Obama. After him are Liu Bei, Cambyses II, Vyacheslav Molotov, Caesarion, Theodosius II, and Henry VI of England.