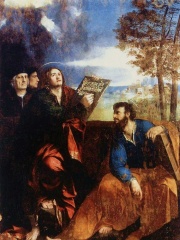 Bartholomew (Aramaic: ܒܪ ܬܘܠܡܝ; Ancient Greek: Βαρθολομαῖος, romanized: Bartholomaîos; Latin: Bartholomaeus; Armenian: Բարթողիմէոս; Coptic: ⲃⲁⲣⲑⲟⲗⲟⲙⲉⲟⲥ; Hebrew: בר-תולמי, romanized: bar-Tôlmay; Arabic: بَرثُولَماوُس, romanized: Barthulmāwus) was one of the twelve apostles of Jesus according to the New Testament. He is said to have been martyred for having converted Polymius, King of Armenia, to Christianity. He has also been identified as Nathanael or Nathaniel, who appears in the Gospel of John when introduced to Jesus by Philip (who also became an apostle; John 1:43–51), although some modern commentators reject the identification of Nathanael with Bartholomew.According to the Synaxarium of the Coptic Orthodox Church of Alexandria, Bartholomew's martyrdom is commemorated on the first day of the Coptic calendar (i.e., the first day of the month of Thout), which currently falls on 11 September (corresponding to 29 August in the Julian calendar). Read more on Wikipedia

Bartholomew is most famous for being one of the twelve apostles. He was born in Galilee and was a fisherman by trade. He is also said to have been a missionary and evangelist, and he is believed to have been martyred in Armenia.

Page views of Bartholomew the Apostles by language

Among religious figures, Bartholomew the Apostle ranks 41 out of 2,272. Before him are Isaac, Saul, Ignatius of Loyola, Anthony of Padua, Pope Gregory I, and Joshua. After him are Thomas the Apostle, Husayn ibn Ali, Romulus Augustulus, Samuel, Pope Alexander VI, and Isaiah.