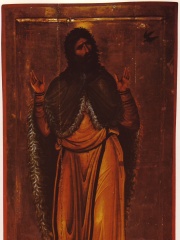 Elijah ( il-EYE-jə; Hebrew: אֵלִיָּהוּ, romanized: ʾĒlīyyāhū, meaning "My God is Yahweh/YHWH"; Greek form: Elias il-EYE-əs) was, according to the Books of Kings in the Hebrew Bible, a prophet and a miracle worker who lived in the northern kingdom of Israel during the reign of King Ahab (9th century BCE). In 1 Kings 18, Elijah defended the worship of the Hebrew God over that of the Canaanite deity Baal. God also performed many miracles through Elijah, including resurrection, bringing fire down from the sky, and entering heaven alive "by fire". Read more on Wikipedia

Elijah is most famous for his confrontation with the prophets of Baal on Mount Carmel.

Page views of Elijahs by language

Among religious figures, Elijah ranks 22 out of 2,238. Before him are Francis of Assisi, Aaron, Isaac, Saint George, Saint Joseph, and Andrew the Apostle. After him are John Calvin, Ali, Abu Bakr, Matthew the Apostle, Saint Barbara, and Samson.

Among people born in 1000 BC, Elijah ranks 1. After him are Queen of Sheba, Nathan, Jeroboam, Shoshenq I, Devadatta, Asa of Judah, Abijah of Judah, Baasha of Israel, King Elah, Ashurnasirpal II, and Menelik I. Among people deceased in 900 BC, Elijah ranks 1. After him are Uzziah, Omri, Abiathar, Agis I, Hazael, Tukulti-Ninurta II, King Gong of Zhou, Hadadezer, Ben-Hadad I, Mattan I, and Marduk-zakir-shumi I.