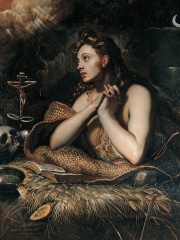 Mary Magdalene (sometimes called Mary of Magdala, or simply the Magdalene or the Madeleine) was a woman who, according to the four canonical gospels, traveled with Jesus as one of his followers and was a witness to his crucifixion and resurrection. She is mentioned by name twelve times in the canonical gospels, more than most of the apostles and more than any other woman in the gospels, other than Jesus' family. Read more on Wikipedia

Mary Magdalene is most famous for being one of Jesus' most loyal followers and for being the first person to see him after his resurrection.

Among religious figures, Mary Magdalene ranks 47 out of 2,238. Before her are Pope John XXIII, Joshua, Judas Iscariot, Ignatius of Loyola, Saul, and 14th Dalai Lama. After her are Pope Gregory I, Job, Pope Pius XII, Bartholomew the Apostle, Jerome, and Anthony the Great.

Among people born in 10 BC, Mary Magdalene ranks 2. Before her is Claudius. After her are James, son of Alphaeus and Lucius Vitellius the Elder. Among people deceased in 100, Mary Magdalene ranks 4. Before her are Mary, mother of Jesus, Saint Joseph, and John the Apostle. After her are Bartholomew the Apostle, Josephus, Saint Anne, Elizabeth, Salome, Zechariah, John the Evangelist, and Zacchaeus.

Others Born in 10 BC