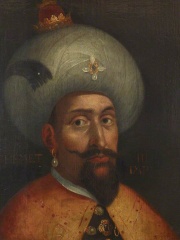 Mehmed III (Ottoman Turkish: محمد ثالث, Meḥmed-i sālis; Turkish: III. Mehmed; 26 May 1566 – 22 December 1603) was Sultan of the Ottoman Empire from 1595 until his death in 1603. Mehmed was known for ordering the execution of his brothers and leading the army in the Long Turkish war, during which the Ottoman army was victorious at the decisive Battle of Keresztes. This victory was however undermined by some military losses such as in Gyor and Nikopol. Read more on Wikipedia

Among politicians, Mehmed III ranks 103 out of 15,577. Before him are Uthman, Mary, Queen of Scots, Theodosius I, Kim Il-sung, Frederick I, Holy Roman Emperor, and Pontius Pilate. After him are Philip IV of France, Hadrian, Mary II of England, Herod the Great, Hermann Göring, and Isabella I of Castile.