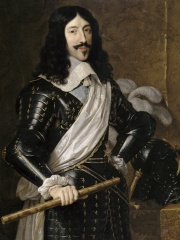 Louis XIII (French pronunciation: ​[lwi tʁɛz]; sometimes called the Just; 27 September 1601 – 14 May 1643) was King of France from 1610 until his death in 1643 and King of Navarre (as Louis II) from 1610 to 1620, when the crown of Navarre was merged with the French crown. Shortly before his ninth birthday, Louis became king of France and Navarre after his father Henry IV was assassinated. His mother, Marie de' Medici, acted as regent during his minority. Read more on Wikipedia

Page views of Louis XIII of Frances by language

Among politicians, Louis XIII of France ranks 123 out of 15,710. Before him are Marcus Licinius Crassus, Angela Merkel, Joseph II, Holy Roman Emperor, Otto I, Holy Roman Emperor, Henry V of England, and Clovis I. After him are Kösem Sultan, Vespasian, Cardinal Richelieu, Hatshepsut, Alfred the Great, and Gustavus Adolphus of Sweden.