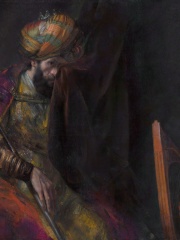 Saul (; Hebrew: שָׁאוּל‎, Šāʾūl; Greek: Σαούλ, Saoúl; transl. "asked/prayed for") was, according to the Hebrew Bible, the first monarch of the United Kingdom of Israel. His reign, traditionally placed in the late 11th century BCE, supposedly marked the transition of Israel and Judah from a scattered tribal society to organized statehood.The historicity of Saul and the United Kingdom of Israel is not universally accepted, as what is known of both comes from the Hebrew Bible. According to the text, he was anointed as king of the Israelites by Samuel, and reigned from Gibeah. Read more on Wikipedia

Since 2007, the English Wikipedia page of Saul has received more than 3,285,242 page views. His biography is available in 63 different languages on Wikipedia (up from 62 in 2019). Saul is the 45th most popular religious figure (down from 36th in 2019), the 16th most popular biography from Israel (down from 2nd in 2019) and the 14th most popular Israeli Religious Figure.

Saul is most famous for being the first king of Israel.

Page views of Sauls by language

Among religious figures, Saul ranks 45 out of 2,238. Before him are Catherine of Alexandria, Pope John Paul I, Pope John XXIII, Joshua, Judas Iscariot, and Ignatius of Loyola. After him are 14th Dalai Lama, Mary Magdalene, Pope Gregory I, Job, Pope Pius XII, and Bartholomew the Apostle.