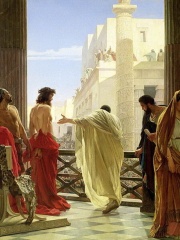 Pontius Pilate (Latin: Pontius Pilatus; Greek: Πόντιος Πιλᾶτος, Pontios Pilatos) was the fifth governor of the Roman province of Judaea, serving under Emperor Tiberius from 26/27 to 36/37 AD. He is best known for being the official who presided over the trial of Jesus and ultimately ordered his crucifixion. Pilate's importance in modern Christianity is underscored by his prominent place in both the Apostles' and Nicene Creeds. Due to the Gospels' portrayal of Pilate as reluctant to execute Jesus, the Ethiopian Church believes that Pilate became a Christian and venerates him as both a martyr and a saint, a belief which is historically shared by the Coptic Church.Although Pilate is the best-attested governor of Judaea, few sources regarding his rule have survived. Read more on Wikipedia

Pontius Pilate is most famous for being the Roman governor of Judea who sentenced Jesus to death.

Among politicians, Pontius Pilate ranks 102 out of 15,577. Before him are Murad IV, Uthman, Mary, Queen of Scots, Theodosius I, Kim Il-sung, and Frederick I, Holy Roman Emperor. After him are Mehmed III, Philip IV of France, Hadrian, Mary II of England, Herod the Great, and Hermann Göring.

Others Born in 12 BC