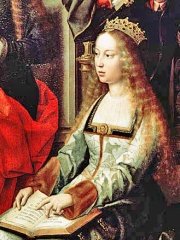 Isabella I of Castile

Isabella I (Spanish: Isabel I, 22 April 1451 – 26 November 1504) was Queen of Castile from 1474 and Queen consort of Aragon from 1479 until her death, reigning over a dynastically unified Spain jointly with her husband Ferdinand II. Isabella is considered the first Queen of Spain de facto, being described as such during her own lifetime, although Castile and Aragon de jure remained two different kingdoms until the Nueva Planta Decrees of 1716. After a struggle to claim her right to the throne, she reorganized the governmental system, brought the crime rate to the lowest it had been in years, and unburdened the kingdom of the enormous debt her brother had left behind. Isabella's marriage to Ferdinand in 1469 created the basis of the de facto unification of Spain. Read more on Wikipedia

Since 2007, the English Wikipedia page of Isabella I of Castile has received more than 4,070,181 page views. Her biography is available in 79 different languages on Wikipedia making her the 108th most popular politician.

Page views of Isabella I of Castiles by language

Among politicians, Isabella I of Castile ranks 107 out of 14,801. Before her are Philip II of Spain, Skanderbeg, Pepin the Short, Bayezid I, Wilhelm II, German Emperor, and Osman I. After her are Xerxes I, Louis XIII of France, Muammar Gaddafi, Cardinal Richelieu, Murad I, and Claudius.

Among people born in 1451, Isabella I of Castile ranks 2. Before her is Christopher Columbus. After her are James III of Scotland, Muhammad Shaybani, René II, Duke of Lorraine, Frederick of Naples, Nicolás de Ovando, and Isabel Neville, Duchess of Clarence. Among people deceased in 1504, Isabella I of Castile ranks 1. After her are Filippino Lippi, Stephen III of Moldavia, Philibert II, Duke of Savoy, Frederick of Naples, John Corvinus, Alvise Vivarini, and Garci Rodríguez de Montalvo.