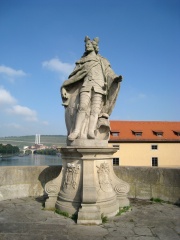 Pepin the Short (German: Pippin der Kurze, French: Pépin le Bref, c. 714 – 24 September 768) was the King of the Franks from 751 until his death in 768. He was the first of the Carolingians to become king.The younger son of the Frankish prince Charles Martel and his wife Rotrude, Pepin's upbringing was distinguished by the ecclesiastical education he had received from the monks of St. Read more on Wikipedia

Since 2007, the English Wikipedia page of Pepin the Short has received more than 1,195,664 page views. His biography is available in 72 different languages on Wikipedia making him the 104th most popular politician.

Page views of Pepin the Shorts by language

Among politicians, Pepin the Short ranks 103 out of 14,801. Before him are Leonid Brezhnev, Theodosius I, Tiberius, Herod the Great, Philip II of Spain, and Skanderbeg. After him are Bayezid I, Wilhelm II, German Emperor, Osman I, Isabella I of Castile, Xerxes I, and Louis XIII of France.