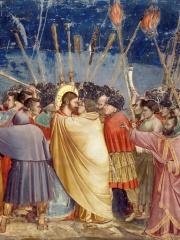 Judas Iscariot (; Biblical Greek: Ἰούδας Ἰσκαριώτης; Classical Syriac: ܝܗܘܕܐ ܣܟܪܝܘܛܐ; died c. 30 – c. 33 AD) was a disciple and one of the original Twelve Apostles of Jesus Christ. According to all four canonical gospels, Judas betrayed Jesus to the Sanhedrin in the Garden of Gethsemane by kissing him on the cheek and addressing him as "rabbi" to reveal his identity in the darkness to the crowd who had come to arrest him. His name is often used synonymously with betrayal or treason. Read more on Wikipedia

Judas Iscariot is most famous for betraying Jesus to the Romans in exchange for money.

Among religious figures, Judas Iscariot ranks 43 out of 2,238. Before him are James, son of Zebedee, Samuel, Catherine of Alexandria, Pope John Paul I, Pope John XXIII, and Joshua. After him are Ignatius of Loyola, Saul, 14th Dalai Lama, Mary Magdalene, Pope Gregory I, and Job.