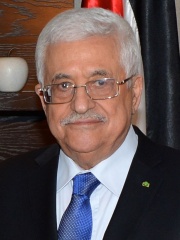 Mahmoud Abbas (Arabic: مَحْمُود عَبَّاس, romanized: Maḥmūd ʿAbbās; born 15 November 1935), also known by the kunya Abu Mazen (Arabic: أَبُو مَازِن, ʾAbū Māzin), is the president of the State of Palestine and the Palestinian National Authority. He has been the chairman of the Palestine Liberation Organization (PLO) since 11 November 2004, PNA president since 15 January 2005, and State of Palestine president since 8 May 2005. Read more on Wikipedia

Mahmoud Abbas is the president of the Palestinian National Authority. He is most famous for his role in the peace process between Israel and Palestine.

Among politicians, Mahmoud Abbas ranks 549 out of 15,577. Before him are Gideon, Philip III of France, Nizam al-Mulk, Abdülaziz, Patrice Lumumba, and John, King of England. After him are Archduke Franz Karl of Austria, Józef Piłsudski, Stephen Báthory, Ay, Valentinian III, and Musa I of Mali.