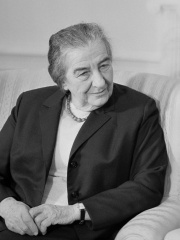 Golda Meir (born Golda Mabovitch; 3 May 1898 – 8 December 1978) was an Israeli politician, teacher, and kibbutznikit who served as the fourth prime minister of Israel from 1969 to 1974. She was the first woman to become head of government in Israel. Born in Kyiv in the Russian Empire, she immigrated to Wisconsin, United States as a child with her family in 1906, and was educated there, becoming a teacher. Read more on Wikipedia

Golda Meir was the fourth Prime Minister of Israel. She is most famous for her work as a Zionist and for her leadership of Israel during the Yom Kippur War.

Among politicians, Golda Meir ranks 358 out of 15,577. Before her are Mustafa II, Stepan Bandera, Philip I of Castile, Cambyses II, Charles IV, Holy Roman Emperor, and Edward VIII. After her are Barack Obama, Herod Antipas, Shimon Peres, George V, Priam, and Gerald Ford.