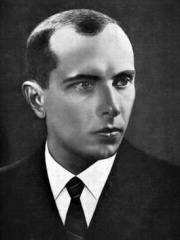 Stepan Andriyovych Bandera (Ukrainian: Степан Андрійович Бандера, Polish: Stepan Andrijowycz Bandera; 1 January 1909 – 15 October 1959) was a Ukrainian politician and theorist of the militant wing of the far-right Organization of Ukrainian Nationalists and a leader and ideologist of Ukrainian ultranationalists known for his involvement in terrorist activities.Born in partitioned Poland (in the Kingdom of Galicia and Lodomeria, then part of Austria-Hungary) into the family of a Greek-Catholic priest, young Bandera became a Ukrainian nationalist. After the Empire disintegrated in the wake of World War I, Galicia briefly became a West Ukrainian People's Republic; following the Polish–Ukrainian War of 1918–1919, it was integrated into eastern Poland. In this period, Bandera became radicalized, and after Polish authorities refused to let him leave for Czechoslovakia to study, he enrolled at the Lviv Polytechnic, where he organized Ukrainian nationalist organizations. Read more on Wikipedia

Stepan Bandera was a Ukrainian nationalist and Nazi collaborator. He was the leader of the Organization of Ukrainian Nationalists (OUN) in the 1930s and 1940s. He was assassinated by the KGB in 1959.

Among politicians, Stepan Bandera ranks 984 out of 15,710. Before him are Subhas Chandra Bose, Frederick V of the Palatinate, Yeongjo of Joseon, Gojong of Korea, Tamar of Georgia, and Todor Zhivkov. After him are Alexander Van der Bellen, Emperor Xuanzong of Tang, Sukjong of Joseon, William Jennings Bryan, Tedros Adhanom, and Fernando Álvarez de Toledo, 3rd Duke of Alba.