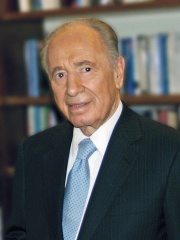 Shimon Peres (; Hebrew: שמעון פרס‎ [ʃiˌmon ˈpeʁes] (listen); born Szymon Perski; 2 August 1923 – 28 September 2016) was an Israeli politician who served as the ninth President of Israel (2007–2014), the Prime Minister of Israel (twice), and the Interim Prime Minister, in the 1970s to the 1990s. He was a member of twelve cabinets and represented five political parties in a political career spanning 70 years. Peres was elected to the Knesset in November 1959 and except for a three-month-long hiatus in early 2006, was in office continuously until he was elected President in 2007. Read more on Wikipedia

Since 2007, the English Wikipedia page of Shimon Peres has received more than 2,554,404 page views. His biography is available in 93 different languages on Wikipedia making him the 245th most popular politician.

Among politicians, Shimon Peres ranks 242 out of 14,801. Before him are Golda Meir, Antoninus Pius, Louis XI of France, Babur, Charles VII of France, and António de Oliveira Salazar. After him are Mehmed VI, Muawiyah I, Charles IX of France, Thutmose III, Lucius Tarquinius Superbus, and François Mitterrand.